Thank you for infuriating me enough to write this down. There have been times when I wanted to write about you and your “clan”, yet I never penned down. Tonight, it was a very minor altercation. For you, perhaps, it is a daily habit; but sometimes it’s the smallest things that trigger the blackest of moods and right now, I am in one.

I am one of the “a-month-per-year” visiting people, who visits Guwahati occasionally and click my tongue at the state of the State but don’t (or can’t or won’t) do anything much. State issues anger me but I feel helpless. The pathetic drainage system, the illegal immigrant issue, illegal construction, illegal mining, corruption in every level- the list goes on, but let’s keep these for another day.

What do you get for Rs. 10/- in an economy so inflated? The tiniest bar of the cheapest chocolate… perhaps, a cigarette… Who haggles over a Rs. 10/- note?
But tonight, I did.

It wasn’t about the value that a Rs.10/- currency note carries; it was about the integrity of you, yes, you who ride the auto, AS 01 M 3974 and the hundreds of the likes of you who are a continuing menace to the public, ripping-off money from public who are dependent on you, thanks to the poor public transport of this city.

I know, as a rule of thumb, that autos are almost a luxury in this city and drivers ask a premium for their “services”. You demand exorbitant rates with no scale or standard fare. At any given day, a ride from Six Mile to Dispur might cost me Rs. 80, Rs. 100, Rs. 120 or any other amount that suits your mood at that time of the day. Another rule of thumb, of course, is negotiation. You say, Rs. 200, I say, Rs. 120 and so we tug and pull and nudge and push to a decided fare.

You form auto-stands and group together at each of these stands. God forbid, I stand outside Anil Plaza on G.S Road and instead of negotiating with the autowalas in front of the building, try to flag down a running auto. The entire crew of autowalas tries to bully me. How dare I not ask them? Because… you group together and decide your inflated fares and swat flies and mosquitoes till you find customers. Go with the group’s rate or go to hell. The fact that I am a female and I am alone is an added advantage to you to bully me. Sometimes, I protest, sometimes I give up and agree to ride on a premium fare but mostly, I move away from the ruckus, afraid of what an adrenaline-rushing group of men can do.

But you, the driver of AS 01 M 3974, you were quite straight-forward. Of course, you demanded an inflated rate and yes, we did the tug-of-war negotiation and decided on the fare of Rs. 110/-. You didn’t harass me or did anything inappropriate or irregular. But tell me, when I was finally dropped off (and you know I asked to be dropped off way before than my agreed drop-off point), why did you pretend that the decided fare was Rs. 120/-? Yes, it is just a meager Rs. 10/- more. And no, I am not a miser. I am just tired with the lots of you. Of being extorted, of your dishonesty, of being bullied. I need your services, so I suffer in silence like the rest of the public.

You, who take advantage of people in need of your services and demand unreasonable fares; you, who sees a lone female at a late hour and bully her into paying exorbitant rates. You are a menace to the society. Yes, the society is dependent on you but you take so much more from it than you deserve.

You will not adhere to a meter-system of fares because you know you are extorting money from the public. Every time the issue comes up for a metered-fare system, you threat and go on bandhs and ultimately, feed a fat wad of notes to an official and close the issue.

I don’t know how far your regime will continue. There’s a long way for Guwahati’s autowalas to be as decent and honest like their counterparts in other cities. You should learn a lesson or two from Mumbai autowalas who returns the exact change and runs by the meter at any time of the day, or night. Imagine my shock when I received a Rs. 2/- coin pressed against my palm by a Mumbaikar autowala!

Maybe it’s the way the city is. In Mumbai, there’s no dearth of public transport; buses, trains, autos, taxis, hence, the public chooses its transport and the demand for autos never ascends.

In Guwahati, I am hopeful the situation would change. I have noticed that in Guwahati, a number of private taxi services have started. How much will you charge on a ride from Six-Mile to Kachari? Rs. 250 on a sound-mind on a good day? Well, guess what! That’s exactly the cost of a ride in a taxi with AC! Yes, the taxis need to be booked but hopefully, soon, there will be enough of them to be hailed at every nook and corner. And who knows, the metro might start. It will take years but this city will get there… it will be a city with a good public transport system. And then, my dear auto-driver of AS 01 M 3974, your demanding regime would end.

In the hope that karma still works its way around,
Your one-time passenger. 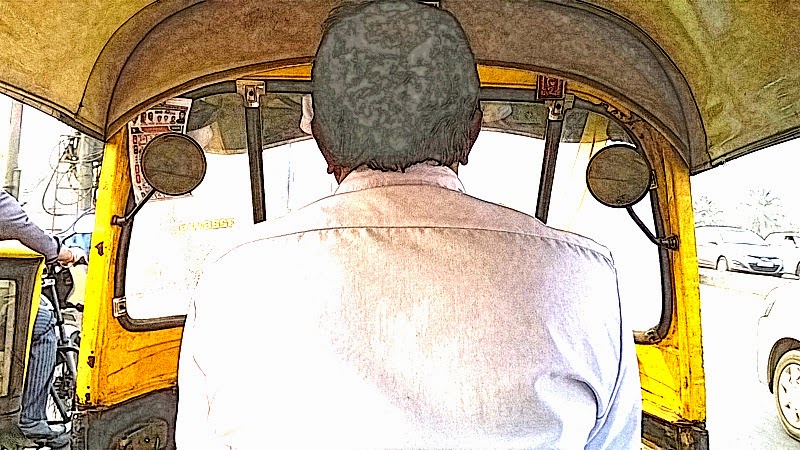 Oscar and Lucinda
by Peter Carey